Stepping Away From The Big Reviews

I love making comics. I enjoy obsessively playing video games. I like writing so much, I often have a stupid grin on my face while I'm typing at my computer. And I relish any opportunity to discuss video games.

So why did the prospect of writing another in-depth review of a video game derail my motivation so much that I had to take a lengthy hiatus from my creative endeavors? 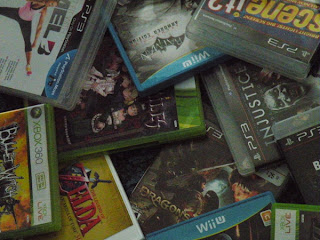 Perhaps it's my straight-forward approach to the subject matter. I set out to avoid the snarky writing that's a staple of the internet era. As a result, I wrote reviews that were devoid of much excitement. I don't regret taking my reviews seriously, but maybe it was too much against my nature.

I always struggled with the level of information I included when drafting a simple game analysis. I know it's not my job to explain every feature in a game, but was I giving enough info to justify why I love or hate it so much? Do I need to spell out every aspect of a funky new multiplayer mode if I'm just going to dismiss the addition with a written shrug? I'm naturally long-winded in my writing; brevity is something I've awkwardly attempted to juggle for years, usually failing spectacularly. These reviews brought out the worst case of rambling I've contracted in a long while. For every sentence of information I added, I felt I needed two more to be consistently thorough in my reporting. This caused a seemingly endless loop of revisions to rearrange earlier paragraphs now that I had decided to expand on concepts I had already touched upon.

This process dragged out the writing process so much that it became the main source of delays in my comics. I could play a video game, be inspired for a comic idea, draw the full comic and then... it would sit there. The process of arranging my thoughts into a complete and somewhat-concise review sometimes took longer than all the other steps combined. Often the looming dread of having to organize my thoughts would be enough to stutter my creative impulses, to make me not even want to play games. It just had to stop. I had to stop.

So that's where I stopped. But I miss the comics. I started drawing Those Games We Play as a way to fuse my passions of playing games and making comics. And I'm going to return to making the comics, and they'll remain  focused on games like they always have been. But the full length reviews are out. I'm sticking with the 3-4 sentence blurb reviews that accompany the comic strip, but none of the over-long blog types. That's definitely not to say I'm out of the rambling-blog business, far from it! I have a lot of video game related topics to passionately babble on about. Especially with the Next Generation of consoles arriving next week. I want to reflect back upon the last few years of gaming, about lessons learned, about changes to my gaming habits, and about my hopes for a bright, glimmering future. From time to time I may even write something that essentially an in-depth review, but only when I'm emotionally invested in the subject and not just because it's my routine.
Posted by meager at 10:52 AM 1 comment: