I forgive Beenox for Spider-Man: Edge of Time.

It's rather ironic that I enjoyed The Amazing Spider-Man so much, as it is a return to the thrilling open-world web-slinging of past games… a formula that was growing stale when developer Beenox took the Spidey franchise reins and delivered the wonderful change-of-pace Shattered Dimensions. 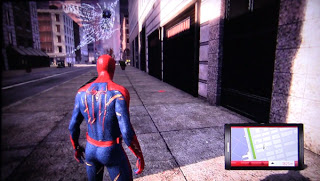 A note of caution should be issued for those not wanting to spoil the Amazing Spider-Man movie… this game takes place after the movie, and is directly related to the ramifications of that plot. Some big spoilers are in casually tossed about right away. If you're concerned about knowing such things, this game really shouldn't be played until after you see the movie.

The game's story revolves around the outbreak of a cross-species virus infecting New York City (again? NYC was already plagued in the recent Prototype 2, as well as in Spider-Man: Web of Shadows. That's apparently Activision's go-to plot device). You fight off scores of thugs with your fists, webs and super-fast reflexes, on the way to saving the city single-handedly (cameos from other Marvel  heroes are sadly lacking). It's a solid enough excuse for a story, with not too much plot padding.

The big selling feature is that Spider-Man is back to swinging around in the wide open area of New York City… between story missions, anyway. The structure of the main story is shockingly similar to Edge of Time. A lot of corridors and almost entirely indoor locations. I do believe many of the environments were just reskinned to use in this game. But they removed a lot of the frustration by not having to jam on an action button to open every… single… door, as it was in the previous game. And there's none of those long "falling & dodging" sequences, though there were a couple places that scared me into thinking they might happen… a nice wink to how annoying those were. 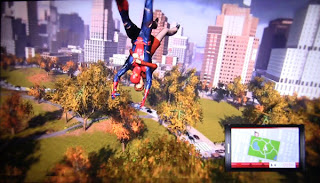 In fact, if anything, the game may be too easy. They removed the "Web of Challenges" from the past couple games, so you're no longer required to pull off certain feats in certain areas in order to 100% the game. "Web-Zip" is now "Web Rush" and it will momentarily freeze time so you can line up a quick movement or attack. Attacking is mostly a one-button affair, switching only if you need to use webs or dodge. Even the web-slinging is simplified to just holding a trigger; No turbo boosting, no extra aerial acrobatics. It's still the most satisfying way to travel, in my opinion. I hunted down the hundreds of comic book page collectibles around the city map simply because I enjoyed swinging on the web (In the Web of Shadows game from a few years back, I collected all 2000+ items, even though I only needed 2000 for the achievement. And I didn't even finish that game. Web-slinging is fun, I tell ya!).

The biggest problem I encountered was the lack of responsiveness with the controls. I'd often hold down the Web Rush button without it ever activating. Same with the "Web Retreat" and "Web Cyclone" and activating the camera. This always leads to being hit or a quick death. Even jumping off the wall can be sluggish.
Load times between levels are pretty lengthy, even with the game installed to the hard drive. They did include Twitter-esque dialog scrolls from citizens to read, which is a nice touch. Wish they updated more than once a chapter, though.

And the side missions lack depth. There are no "side-stories". Nothing random or dynamic, either. They'll pop-up as you progress through the main story, but after you've completed them all, don't expect to deal with random muggings or car chases. 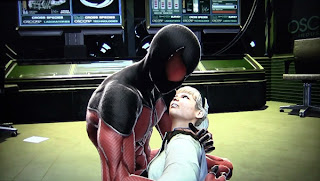 The graphics… are a mixed bag. The human character models are pretty ugly and outdated, but the monsters looks good, the city looks great (There's even a handful of different atmosphere conditions for the city throughout the game, and post game roaming allows you to choose between them), and Spidey's animations are pretty spectacular. The game starts off on a bad foot, with an extended first-person perspective of Peter Parker walking around the Oscorp facility. You get to see the ugly character models up close. Reminded me of Batman: Arkham City, which started off with the ugliest graphics in the game. They should have begun with some open-world web-slinging, to get you excited rather than bore you with an extended walk-and-talk sequence.

All in all, despite the flaws, I really enjoyed myself all the way through. It took me about 20 hours to get 94% completion, most of that side missions or item collecting. Or just having fun swinging around the city. Did I mention how much I enjoy that?

I just wish they had spent a little more time on the game, tightening the control responsiveness, and integrating the side missions dynamically (Most side quests, excluding simple muggings, "fade" out to the mission, and the "fade" back to the map when you're done). But it's a decent blend of standard beat-em-up fare and Spider-Man quick-web goodness. 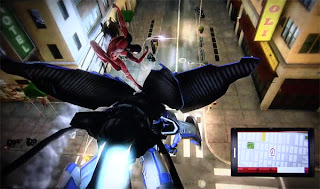 Recommended for: Lovers of Spider-Man! It is a solid entry in the series, and certainly a step up from last year's frustrating mess.

Franchise Fixes: Take some more time before the next entry. Get everything polished up and seamlessly blend the open-world with the story and the side missions. Also, take a cue from Batman: Arkham City and give the side missions some story and depth of their own. And next time the game is tied to a movie, how about make it a prequel so you're not spoiling the film's plot?

Achievements/In-Game Reward System: Not a big mix of challenges, most achievements are given for story progression, difficulty setting and task completion. A couple diversionary achievements don't do much to make this list  too exciting, although it is an easy game to boost your score with. I wish they had more in-game rewards, though. When I completed the storyline, I was at level 22… upgrades stop coming at level 20. The game could really use additional unlocks, perhaps making the costumes obtainable this way? Which reminds me… one redeeming quality about Edge of Time was that it awarded players from Shattered Dimensions with unlocked costumes. Sadly, the tradition did not continue here.