Bejeweled Blitz Live is yet another obsessively addictive puzzle game from Popcap, available through Xbox Live Arcade. It is a stand-alone version of the Lightning Mode from Bejeweled 3, and similar to the version of Blitz available to play on Facebook. 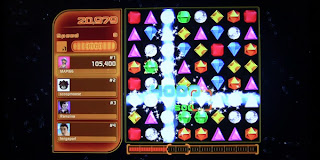 This version of the sparkly gem-matching puzzle classic will absorb your free time with the greatest of ease. The strict one-minute timer will test just how well you can handle the pressure of a countdown. If you've played any iteration of Bejeweled before, you'll ease right in, though the changes may take some getting used to.

Mainly, the control scheme, while quite brilliant in its obvious simplicity, is quite different than that of the old game. The face buttons now indicate which direction to move the selected gem. For instance, moving the cursor over a gem and pressing X will switch that gem with the one to the left, the A button will move it downwards, and so on. It works marvelously, once you get the hang of it. Though a lot of long-time Bejeweled players will balk at this revolutionary control scheme.

Other changes include lightning gems, which are formed by getting five gems in a row (or T or L shapes). These powerful items will obliterate their entire row and column when detonated, usually guaranteeing a multiplier being dropped on to the board. These multipliers, which show up whenever a certain amount of gems are removed from the table in a single move, are key to racking up crazy scores in such a short time.
Also new: online multiplayer. You can either go head-to-head with one person, with both game tables on the screen at once (though you really don't have time to be watching their board), or with up to a total of 16 players in Party Play mode. The party mode displays only your game board, but a graph shows everyone's gamerpics as they move upwards in real time. 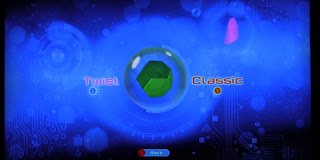 While these new features are great, there are a few things missing from the features list.

If you've ever played Bejeweled Blitz on Facebook, you'll notice something's missing. The Boosts which you could purchase with in-game currency are gone, as is the entire coin-earning system. This significantly reduces scoring opportunities, and was an unnecessary removal. They could have easily kept them in and simply increased the high score achievement goals to compensate.

Another dramatic change from the free Facebook version: the timer no longer stops while the gems cascade to fill holes. This robs you of precious seconds while you wait to see how things are going to line up. They likely made this change for purpose of adding Online multiplayer, so everyone is on the same clock… but I would have preferred if everybody's clocks stopped each time rather than never.

One other major addition was made for the XBLA version… Twist mode. I've never played Bejeweled Twist, so I don't know how the blitz version compares to the regular, but I'm loving it here. You have to enter a different mindset  than in Classic mode, as you are rotating blocks of 4 gems at once (I recommend using the triggers for your rotation controls in this mode). You're still matching 3 or more gems, but you're no longer limited to only making moves that make matches. Instead of relying on lucky drops where you can use them, you can move gems wherever you want, one rotation at a time. I average twice the score in Twist mode than I do in Classic. Once you get the hang of it, it is great fun. More addiction awaits you!

Only having to commit to a minute of gameplay at a time is a fun break in your day, though playing for an hour really burns my eyes with all the sparkling gems, flashy effects and pulsing screen effects.

Overall, I enjoy this game quite a lot. The addition of Twist mode really helps offset losses from the Facebook version. However, it's value is decreased with a similar product included in the full version of Bejeweled 3. Twist mode is a fantastic inclusion, but with only 2 modes, fans of the series may feel a lot's missing. 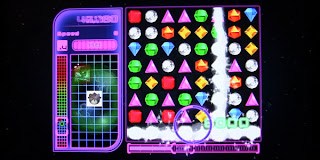 Recommended for: Puzzle gamers, fanatic and casual alike, as well as anyone wanting a game to help train their power of observation.

Franchise Future: As much as I like the game, it is a bit short on game modes. In the future, I hope they stick with releasing full proper versions of Bejeweled.


Achievements/In-game Rewards: Bejeweled Blitz Live come with a pretty straight-forward list of achievements, for making gems for the first time, to achieving certain score & level benchmarks. I played off and on for over a year before finally ranking up to Level 50.
Posted by meager at 8:59 PM