It's amazing how much Lollipop Chainsaw feels like Grasshopper Manufacture's previous game, Shadows Of The Damned. 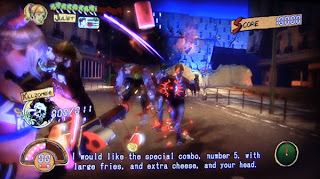 They appear quite different on the surface: The main protagonists are different ages, genders, and attitudes; Damned is a shooter, Lollipop is (mostly) a combo-heavy hack'n'slash (more reminicent of Grasshopper's No More Heroes); Lollipop is filled with bright, candy colored visuals, Damned... not so much.

However, on closer inspection, the similarities are obvious: Damned hero Garcia Hotspur is a Demon Hunter, Lollipop's Juliet is a Zombie Hunter; They each have a chatty sidekick that's mostly inanimate; Damned is a battle through Hell, In Lollipop, Hell comes to Earth. The shop system is practically identical, the levels equally straightforward, and game designer Suda 51 injects the same "WTF?!?" brand of humor.

When coming up with game ideas, could they not decide on which characters, settings and gameplay mechanics to use, so they decided to just make two games? Is Lollipop considered a spiritual sequel to last year's Damned? Whatever the reason, I'm truly happy with the end product. And if Grasshopper keeps making new IPs, I hope it ultimately leads to some mega-Suda-51-crossover-smackdown game.

Lollipop Chainsaw is the story of cheerleader & expert zombie hunter Juliet Starling, who arrives at school one morning to find the undead filling the halls. Her boyfriend, Nick, is victim of a zombie attack and ends up a decapitated head dangling off Juliet's waist. Together with Juliet's zombie-stomping family (though they don't actually provide much direct help), they will fight the hordes through six stages, complete with the standard boss battles. 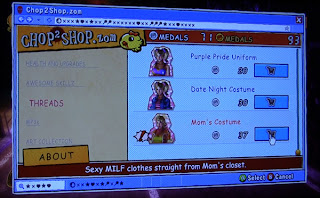 The combat system is a mix of light pom-pom attacks and strong chainsaw moves, with the requisite dodging suitable for an agile cheerleader. These attacks can be bolstered by using gold coins (called medals) won in combat to buy powerful combos. As you progress through the storyline, an upgrade for your chainsaw will be presented to you, allowing your chainsaw to be used as a gun. Seriously (This also makes me wishful for a sequel to Bulletwitch).  You will also gain the ability to use Nick's head in a number of ways, though it's limited to one-time-use "Nick Tickets" that are rarely found, but available for purchase in the store. Unfortunately, using a Nick Ticket activates a roulette, and if you aren't good at stopping the spin where you'd like, you might end up activating a less-helpful Nick ability.

Levels are designed to leave little room for exploration, sending you through on a linear path. Boss battles at the end of each stage are a mix of active combat and button prompts.


Graphics are colorful and appropriately sparkly, but the designs of the characters and backgrounds aren't very memorable. Same with the animation; it works well, but just seems like it's been recycled from a number of other games. The sole exception to the mediocrity is Juliet herself. She obviously received full attention in the character design and animation stages. The game rests on her playability, and it truly shines. As does her voice acting. Veteran voice actress Tara Strong does a remarkable job bringing Juliet to life. She's supplied with some highly amusing dialog as well. Her brief conversations with Nick about his favorite color and if he wants to have a baby are downright hilarious.

I do have a few quibbles with the decisions made for the gameplay... What is the obsession with making me actively cut through a door?? That concept stopped being interesting two console generations ago. It was a big annoyance in games like Spider-Man Edge of Time, and they fixed it for The Amazing Spider-Man. When will Grasshopper stop relying on such an archaic "gameplay" extender? If there's a door I need to kick open or chainsaw through, let me press a button once and then watch Juliet take care of the rest on her own. I'm not in danger of being attack or dying if I fail to get through in time, so there's no reason for strenuous activity when I could better use this moment to get a drink. 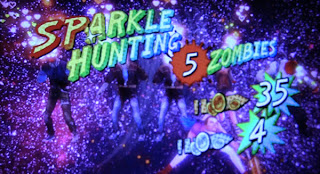 There's also a "Sparkle Hunter" bonus that pops up whenever you kill 3 or more zombies with one move (or if using the gun, within a certain time... I guess? It doesn't seem to be well defined). When this happens the screen turns bright pink and with rainbows and glitter and such, as it shows you cutting through those zombies and everything else disappears for a moment. You also get bonus Platinum Medals, used for unlocking concept art, music, and costumes for Juliet. My problem with this is that is stops the action too often. Aside from the fact that I often get hit as it returns to normal because if the disorientation, but if you're good at this game, you'll be seeing this so often it becomes quite an annoyance. A simple pop-up announcing your multikill, without interrupting your game flow, would be so much less intrusive.

I would have liked to see less linear game progress. After you finish the first stage, it shows you all the bosses on the map, but will only let you play them in order. There's no real reason for this. They could have provided you with the upgrades and story dialog between stages, regardless of what order you chose. Instead, you're unnecessarily stuck with the order they give you.

Aside from that, there's an occasional problem with the camera, and at times it seems like Juliet isn't doing the combo you're telling her to do (it couldn't possibly be a fault on my end!!). But that's stuff pretty standard troubles that unfortunately I've gotten used to in games.

The game does feature an impressive number of unlockable costumes for Juliet, though they cost a lot of platinum medals, so you'll be grinding a lot to afford them. There's alternate cheerleader outfits, incredibly skimpy bikinis, and some cosplay costumes from what I'm told are Japanese cultural icons. The American-inspired ones, such as one based on Ash from the Evil Dead series, were (so far) strictly pre-order bonuses. Too bad, because Ash seems to me to be the most directly related to the gameplay.

Some people may take issue with how short the game is: Six Stages, plus a prologue. You can run through it in four to five hours. It almost feels designed like a twin-stick shooter, equivalent to something like Deathsmiles.  You'll be replaying stages to grind out medals to unlock everything. Perhaps this should have been marketed at a more budget price? Sixty dollars seems steep for this amount of game and its unimpressive secondary designs. $40 would have been a good starting point. Or perhaps it could have made an impact with $5 episodic stages?

Lollipop Chainsaw provided some good times, and a few great laughs. But apart from Juliet herself, the game has a bit of a cranked-out feeling.

Also... crazy stereotypical characterization aside, why doesn't Juliet's father, the supposed bad-ass head zombie hunter, actually do anything helpful? Maybe they're planning some Dad DLC to explain what he was up to while Juliet was actually fighting things. Though I'd prefer Sniper Sister missions. Then again, both those things would lack Juliet which is the best part of the game, so maybe that type of DLC isn't such a good idea. 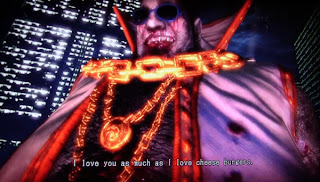 Recommended for: fans of combo-heavy Hack & Slash gameplay, though waiting for a price drop would be beneficial.

Franchise fixes: Since I mentioned it, I would like to see a full-fledged cross-over game featuring Juliet in other character's game worlds. It would break up the monotony of the zombies.

Achievements/In-Game rewards: A rather dull list of do-everything, collect-all-stuffs, get-high-scores. No avatar awards or other such unlockables. The multitudes of costumes for Juliet are about all to really strive for.
Posted by meager at 11:58 AM