I thought a game about puppets would be more entertaining. 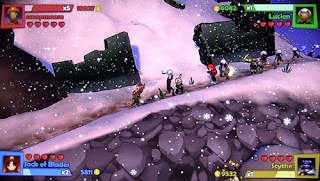 Fable Heroes is a 4-player brawler, devoid of any actual narrative. You move from one level to the next over the playable area of Albion. Most levels have a fork in the road, allowing you to choose how you'd like to end the level: a boss fight or a minigame. Neither choice alters the route of the game. You'll still play through the same handful of stages, before unlocking "Dark Albion", which features "dark" versions of the exact same stages for you to play through again.

- They tried an interesting concept with one stage: Named "The Cloud", this stage was initially locked until the player community reached a certain benchmark in earned gold. However, it was reached within a couple days of the game's release and is now open to play. It's an odd thing to think about… What if the game failed to sell? This level would just be sitting there? And now that it's permanently open there's nothing special about it. It was sort of there to punish early adopters. Day One players weren't able to play the whole game. But they could have helped to unlock it. A weird experiment, but ultimately short-sighted.

You have several characters to choose from: Four to start with, a handful more to unlock as you progress through the game. You'll also choose your three A-I teammates, if playing alone. Most are melee characters, but there are a couple ranged fellows. You can also unlock the powerful Jack of Blades, which features both fighting styles. Aside from one basic attack, you have a much slower Flourish attack. You'll need to spend in-game gold to level up your attack speed, strength and range. The dodge-roll button will be your best friend when battles get chaotic.

You play as a wooden puppet version of "your favorite characters from the Fable Universe". That presents a problem for me, since I never made much of a connection with any character in the Fable games. I liked my farty show-off create-a-character that I molded throughout each game. That was a highlight of the Fable series, being able to be your own character, to make choices that affect your life and your story. None of that is in this game. They could have at least let me play as my PANSE (Xbox Avatar). 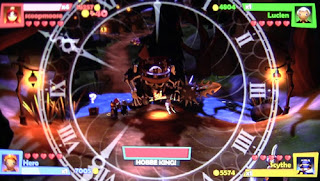 Aside from ignoring the core foundation of Fable, they seem to have gone to great lengths to make this experience as dull as possible. Aside from the aforementioned fork in the road at the end of the levels, the stages are frightfully linear, as you literally walk down the street, unable to interact with houses or backgrounds. There are no combos to your attacks, just a basic attack and a flourish. You can purchase an upgrade to get a finishing move, which you will have to unlock for every group of enemy types.  The most exciting part of the game is building (and keeping) your multiplier so you earn more money. Killing enemies, or finding multiplier bonuses in treasure chests will raise your multiplier, while getting hit or going too long without making a kill will decrease it. Of course, it starts with a pretty low maximum until, you guessed it, you buy the upgrades. It seems like this game was designed as a micro-transaction affair, though thankfully the end product does not take any money beyond your initial Xbox Marketplace transaction.

While the graphics and animation are all solid, they do lack any special qualities. I think this again is due to the limits of the franchise it draw upon. For me, Fable doesn't necessarily have its own recognizable art style. It's just sort of a semi-cartoony version of historic English villages, maybe a little steampunk thrown in here and there. And while the look of Fable games is connected to that certain era, that historic period isn't connected necessarily with Fable. So, this just looks like it could be any game. It's Fable? If you say so.

The stages, besides being lackluster and linear, are too spaced out. Groups of enemies pop out at certain areas, and in between there are usually long stretches of road with nothing to do but break barrels for coins or open treasure chests for mostly useless prizes like balloons that drop a couple coins when popped (as opposed to just letting you have the coins) or turning you into a slow-moving giant for a time. Remember how the multiplier decreases when you aren't actively killing enemies? With these huge gaps in between enemy groups, it's obvious the game is against you getting those high scores.

The simplistic combat and straight-forward level designs are not the unfriendliest part of the game, though. That award would go to the unlocking system. Between levels, you are placed on a square game board. Your performance on that level awards you with a number of dice rolls. To unlock an upgrade, you must land on that tile and then spend your hard-earned gold on the new perk. However, there are usually three upgrades on each tile, so you'll have to land on that same space three times. But the spaces don't disappear when you complete them, so as you near full completion, you'll be wasting your rolls trying to land on that last elusive space. 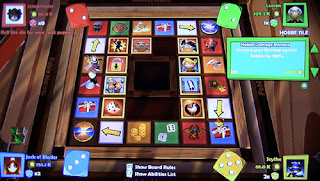 You'll also be in charge of upgrading your A-I buddies. This means you can work on upgrading all your characters four-at-a-time this way, though you will probably need to give them some of your gold (by going to a certain spot on the game map) because their take will likely be significantly lower than your own (which also means they'll get less dice rolls to use on upgrading).

Once a character finally purchases all of their upgrades, they move to a special section of the board where they spend their gold on one-time perks such as invincibility, to be used on the next played stage. These are also governed by luck, having to land on them instead of just being able to purchase them outright. A more user-friendly game might have just put these tiles on the board in place of the fully-purchased upgrade tiles. Actually, a better game might have just made a store for your characters to pick and choose what they wanted to buy whenever they wanted!

One other thing, on a technical side... while the game played well, the A-I characters would routinely disappear and reappear. Almost always this would happen mid-level at a giant object you're supposed to smash to get coins. Sometimes they won't reappear. But they'd still be there, totally invisible, because later in the level I'd see enemies getting beat up with no one around them. A bizarre glitch.

So, who is this game for? Sometimes it feels like it used to be a Facebook game, other times it feels like it was being geared for Kinect controls. It seems very much marketed to a young childhood audience, yet it's based on a series that has been very much Mature rated so far. I know Fable 3 had a more-simplified combat system from the previous games... is this game the ultimate goal they were heading for? Are they telling us that the upcoming Fable: The Journey (with its lower Teen rating) is not at all intended for long-time series fans? I just hope it's not as dreadfully dull as this game was. 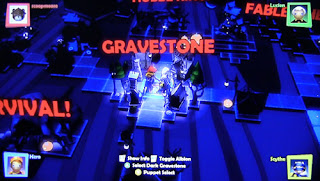 Franchise fixes: This could have been a great game, it just needs some amount of depth. It's cute, but it's not cute enough. It could be a good brawler, but it needs something more. A story, perhaps? Unlockable combos?

Achievements/In-Game Rewards: The achievement list is nice and varied, though you'll have to read it to know what to do, as it wants you to use specific options in specific levels. The game even comes with a couple nice Avatar awards: a shirt for completing the first stage, and a Jack of Blades mask for fully upgrading the Jack of Blades character. Too bad, beyond new characters, the in-game unlockables aren't great.
Posted by meager at 4:41 PM