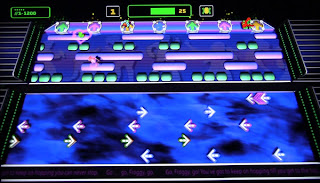 Frogger is back, and more neon than ever.

Frogger Hyper Arcade Edition is the classic Frogger gameplay, decked out in new skins to fit your graphic tastes. You can choose how you like your Frogger action to look: the retro giant pixel look, neon colors filling the screen, or even graphics based on other classic Konami franchises. You can also choose from a selection of tunes to cross traffic to, with clever frog puns for their titles. Finally, choose between control style of single hop, or continuous hopping (while pressing a direction, not actually constant movement, thankfully), and you're ready for the old fashion Frogger gameplay you've known and loved for the past 30 years.

And I do believe they made the game easier. I was never all that great at Frogger. Looking at my achievements on the original XBLA port of Frogger, it seems I never beat level 2. I got to level 4 on Hyper, and boy was I proud of myself. But I played a round from the old XBLA title to see if I had just gotten better over the years, but as soon as I started up that game I saw the difference. It had more obstacles, all moving noticeably faster. It's rather misleading that this new version is called "Hyper" when it is much more leisurely paced.

The timer is your greatest threat. While playing, if the time hits zero, you lose. Not just the life you're on, but it is game over regardless of how many Froggers you have in reserve. That's quite harsh. And also the reason I didn't make it past level 4.

The core game mechanics haven't changed, so veteran Froggerites will ease right in. It may take newcomers a while to get used to the infamous collision detection. There's still that invisible block around the cars on the road, and jumping into a seemingly safe spot too close to the rear of a car causes death. It's definitely, undeniably Frogger. 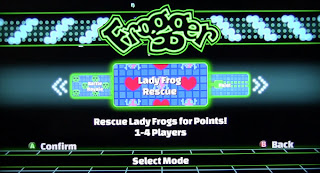 And really, that's what it comes down to... if you've enjoy classic Frogger, you'll enjoy this colorful remix. But there's not much here to draw in Frogger haters.

Sure, there are a few new modes.

There are some paint-by-numbers missions to draw a picture while avoiding traffic and not touching unmarked squares. Not very difficult; once you paint a spot, it stayed that way even if you touch it again. The timer is the only thing really you have to keep in mind.

There's a multiplayer Battle Royale mode, where you actually use a button! Your objective is to kill/outlast the other players. This is accomplished by either grabbing the lady frog power-up, giving you a few moments to squash your fellow frogs, or by picking up colored flies which grants you powers to screw with other players, leaving them more susceptible to oncoming traffic. It's not very deep, as there are no defensive powers. It's all just a matter of getting to the power-ups first. 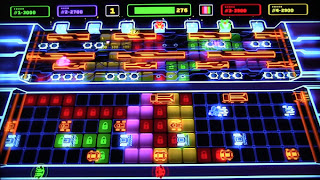 Other modes include steering two frogs to safety simultaneously, trying to colors as many tiles as possible, and even a challenge mode that makes you duplicate feats you may have done before, but on a much stricter timer.

There are a few poor decisions with the menu navigations, leading to unnecessary annoyances. Challenge mode does not offer a "next" option after you complete a challenge, instead making you go back to the challenge selection screen, where you must scroll through them all starting with the first challenge, to find where you left off. There's no "random" for the music selection, so you're stuck with the same song repeating over and over while you're in a level. The unlockable movies are hidden in the Help & Options submenu, rather than being out where they could be accessed as an actual feature. Small things like this can really add up, and a little more work on the user interface could have easily circumvented these issues.

This game really tries to be the equivalent of the recent Pac-Man Championship Edition games, but there's just not enough content to hold your interest for long. The problem is that its content is pretty much all available from the get-go. Pac-Man CE had you unlock things as you played through it all, which kept you coming back for more. If Frogger Hyper Arcade Edition rewarded you for getting so far on each stage with each skin, there'd be more incentive to stick around longer.

You can see and do pretty much everything this game has to offer in an hour or two. Then it's just a matter of how often you'd like to go back to the classic mode, as if you were playing original Frogger. Still, it's probably the best version of the old game yet. 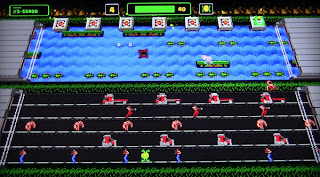 Recommended For: gamers who love these classic arcade titles, and who are keeping the Konami Code alive!

Franchise fixes: Honestly, I've never been convinced that Frogger is very viable in today's market. His original 2-d static-screen platforming still works, but it really hasn't grown, nor is there a call for it to do so. This game adds some flourishes and superficial extras, but that's really as far as I can see this franchise going without sacrificing Frogger's core and becoming the horrible crap that his last-gen 3D games have been.

Achievements/In-Game Rewards: The only unlockables in the game are the Frogger movies (featuring  "Frogger In Love" shorts, reminiscent of Pac-Man cutscenes) and a couple skins for classic mode. The Achievement list is easy pickings for any Frogger fan.
Posted by meager at 5:21 PM