It's good to see Tony Hawk games back on the right track. Now they just need to travel a bit further down the line. 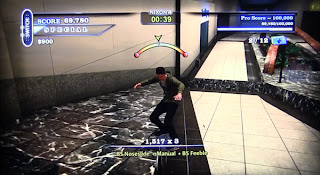 I got into the series back on the original Xbox with Tony Hawk Pro Skater 4. The next several years, I would make it a tradition to pick up the new game as it released in October, usually lining up perfectly with Toys 'R Us's annual buy two get one free sale. They didn't grow substantially between each release, but I enjoyed getting back to that familiar playstyle with new maps. That's all I really needed.

American Wasteland and Proving Ground were rough patches, but I had no idea the series would bail so completely with the ill-conceived board peripheral games. I championed for Activision to embrace the HD collection route that's brought back so many last-gen titles. I envisioned one collection being the first three Pro Skater titles (all featuring the two minute objective-based levels), then a second collection containing #4 and the two Underground games. At last, all Tony Hawk games would be available on the 360, and the world would be in balance.

Well, it didn't work out quite that way, but it's still great to finally have some real Tony Hawk action again. Granted, it shouldn't be trumpeted as the second coming, but it helps fill a void.

Like I said, I really got into the series with number four, which left behind the small, timed arenas in favor of spacious, well-crafted, over-the-top stages. I played some of Pro Skater 3, but disliked the time restraint. So it was ironic that the saving grace of the ugly, juttery American Wasteland was the return of the classic mode. It gave me a new appreciation of those bite-sized levels. So now with Tony Hawk Pro Skater HD, a mash-up of the first 2 Tony Hawk games, I feel right at home. I just never would say I was good at it.

There are seven levels, only one available at the start, and completing a set number of goals on a level will unlock the next stage. It's not a cumulative unlocking, however, so completing more tasks on earlier stages won't speed up the level-unlocking process. But the more goals you complete, the more money you'll earn to upgrade your character with higher stats, more special tricks and alternate boards. But these unlocks only apply to the single skater. You'll have to play through the whole game time and again if you want to max out everyone, including your PANXE (Xbox avatar). That's what we call artificially inflating the game content, an age-old gaming tradition. I would have preferred more stages, as this selection feels too light, and I fear its set up just to be bombarded with DLC.

It is a bit difficult to go back to this time before all the expansive tricks from later in the series. I can actually handle not having the combo-extending Revert, which is planned as DLC (talk about game changing... if it's usable in these old stages, high scores will no longer be a challenge). And, sure, it'd be nice if I could control the camera, so I could actually see a collectible that's slightly out of my eyeline before attempting a manic jump. But what I really miss is the wall-plant, so I'll stop splattering violently against walls. Oh, and the ability to level out your skater when they take a crazy arc off a halfpipe. Fancy flatland tricks are missed, as is the ability to switch lip & grinds tricks (without an ollie in between). Also, you can only equip 5 special tricks... what's up with that?? 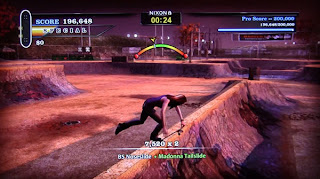 But for older players, those that played the game in its earliest days, this will fit you like a comfy old pair of jeans. Perhaps it won't feel exactly like you remember, but the nostalgic memories will come rushing back. It's like playing Super Mario Bros after a decade away... it's easy to remember where all the gaps and goals are. But that familiarity is puzzling to me. As I mentioned, I never played the first two Tony Hawk games. So why do all of these levels seem so very familiar? I know a couple of them have definitely been around in HD form before, in American Wasteland. Have the others been recycled too?

Another disadvantage I had going into the game, having not played the original games, I had never before encountered the "Big Drop" indicator. If you aren't holding down the A button when you land, you will crash (though if you can land in a grind, you'll be fine). It's not very intuitive, as it will often pop up a split-second before impact.  This must be something they did away with pretty early in the series, as later games featured many areas that would launch you to ludicrous heights, from which you could land with your spine totally unfazed.

Tony Hawk games never were graphical powerhouses, especially with the character models, but the graphics here are fine. They never distract from the game. There are the same odd random glitches that I've come to expect from this series... weird collision problems, random sideways physics (especially at bowl-shaped ramps), and sometimes my character will just decide to fall down. A few times I've even had my A button stop working during gameplay on the Hanger level. It's not my controller because it still works to navigate the pause menu, it just decides it won't let me jump anymore until I start a new round. It's quite inconvenient, I must say.

The lack of local multiplayer is a shocking absence. I might have never picked up the series if I hadn't played some Graffiti Tag at my friend's house. Now, someone else might be missing out on the franchise because they can't play a game without the competitive pressure of Xbox Live. As it is, I found the online multiplayer to be very unstable. I only got into two games, across more than a dozen attempts. Even then, everything moved sluggishly. And the second game never actually ended... when the time ran out, everyone just got locked in place. 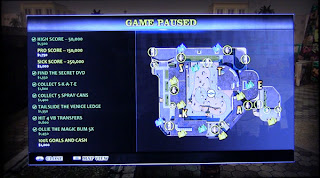 Other modes include a pellet-hunting mode called Hawkman (I didn't like it when I tried it in Tony Hawk's Proving Ground, and I still don't like it here), a survival mode that requires you continue doing tricks or your head will explode, or just an untimed practice mode. Also, if you complete every goal on every level, you will be given even more challenging "Projectives". Beat all of those for a sizable gamerscore achievement.

Like the recent Goldeneye remake (another Activision joint), it's obvious this game was not designed to ignite interest from new players, but rather to rekindle the flame of old fans. There is no tutorial mode to help newcomers. There is a map in the pause menu to help find all the goals, but it's not dynamic so even completed goals are still left marked to add confusion. You'll also have to dig deep in the menu system to find a trick list... there are goals that require a specific trick, but it won't list how to perform it. There's no create-a-character, or create-a-skatepark, or even create-a-custom-music-tracklist (Much to-do has been made about the pared down tracklist. None of it really appeals to me, so I just run my own music off my hard drive).

All and all, it's fun, and worth your time... IF you're a hardcore Tony Hawk fan. They should have named it Pro Skater Lite, as there's not a lot of real game here. It's missing so much, especially to draw in a new crowd.
2.5 out of 4 Stars. 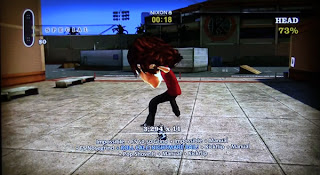 Recommended for: The Tony Hawk Elite. Those guys putting up the million-plus runs on these two-minute course are exactly who this game is for.

Franchise Fixes: I'm still holding out hope for a complete THPS 4 thru Underground 2 HD Collection (not remake). If they want to "fix" this game, however, perhaps a few free DLC levels would be in order.

Achievements/In-Game Rewards: The vast majority of this achievement list is for the gifted players. I only got the token few for unlocking each level in career mode. Aside from unlocking bonus characters, and cheats (which will disable achievements), there's not much rewarding going on. A sick score will have to be its own reward.
Posted by meager at 2:09 PM