Confused, I thought maybe if I waited the game would finish loading something that was supposed to be here? I rested my controller in my lap, and that's when one of the shoulder buttons was accidentally pressed. On the screen, a black sphere suddenly appeared and flew down into the empty white void until... splat! Black paint splattered across a wall I didn't know was even there a moment before. The game had indeed begun, and it was up to me to find my way, to essentially draw my way out of this featureless room. Without the paint, it's nearly impossible to navigate the area... and yet, use too much and you lose critical environmental contrast and you can end up in a blank room again. 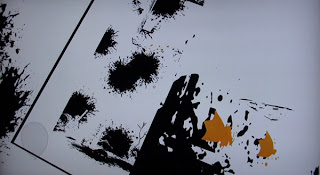 An hour or so of gameplay later, my face flush with childlike wonder, I finished the game; Aching for more, yet still basking in such a rich, creative experience.

The mechanics of the game change throughout its short play-time, from stark paint and clever use of water, to controlling light and shapes. If I truly find any big fault with the game, it's that each mechanic is segregated to its own part of the game. You never come to a part where you can swap through your abilities to progress. It's a shame they discard mechanics as the game goes along, which limited the puzzle potential. The game is devoid of danger for the majority of the time, and when there are enemies to avoid, it's almost disappointing because you just want to explore. 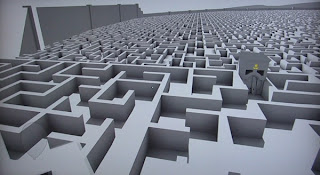 Despite my initial befuddlement, the lack of a hand-holding tutorial or any annoying tips popping up was a breath of fresh air. It was quite rewarding when I figured out I needed to use my throwing spheres to manipulate certain items rather than just to reveal paths. One of the many fresh experiences I had during this game. There wasn't even any true HUD elements, aside from the unobtrusive aiming reticule. The only other on-screen icon I had was one I unlocked to help me find balloons (the game's token collectible).

I can not gush enough about this game. It fills a void I didn't know even existed. I didn't go looking for  such a fascinating game... it was just there, smiling unassumingly up at me. I'm just so glad it exists. Give it a try, all of you. 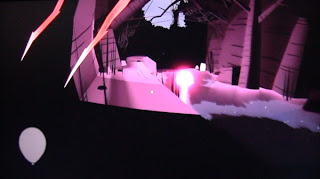 Recommended for: Everyone looking for a majestic, unique and undemanding gaming experience over a short period of time.

Franchise fixes: This game cries out for episodic content. In fact, it probably would have been easier to swallow if the 3 Acts were released separately for 5 bucks a piece, instead of $15 as a whole. I would definitely pay for future DLC to add new play mechanics to the creative arsenal. Also, a GTA-sized open-world environment would be a magical playground.

Trophies/In-Game Rewards: For once, I didn't pay much attention to the trophies as I played. I was enjoying the experience. Weird. But you get half the achievements just for playing the game, then there's a few more if you can accomplish certain tasks; a decent list. In-game unlockables can adjust how you work with your paintballs, but nothing too fancy.
Posted by meager at 12:05 PM