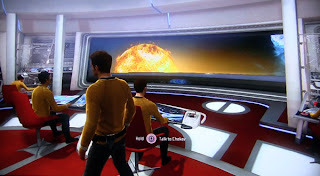 This game does have the advantage of not having to awkwardly stretch the movie's plot into a ten hour game. From what I gather, this story takes place between the 2009's Star Trek reboot and this summer's blockbuster sequel. The storyline is a forgettable investigation of a distress call that leads you to a couple different planets for a decent mix of environments. Gorn, the epitome of rubber suited alien races from the Original Star Trek television series, are the main baddies in the game, having invaded Federation Space due to experimental technology tests. The Gorn was a good choice; something rooted in Star Trek lore, yet rarely seen and probably won't ever affect the continuity of the movies. 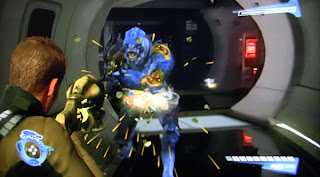 You'll fight off hundreds of these lizard-type monsters in Mass Effect-style cover-based third person action. The cover isn't very effective, as the aiming is buggy and your character doesn't care to actually stick to the cover. But that's balanced by the fact the combat is ridiculously easy, even on the hardest difficulty setting. The enemy's tails stick far out from cover so you can easily whittle down their health while they are oblivious to the fact that they're taking damage. The variety of weaponry is uninspired, and the game could easily be completed using only your default endless-ammo phaser. Your A-I companion (the game supports online & offline co-op, but available games were hard to come by) is somewhat competent in battle, but he gets stuck on the environment so often you'll hardly notice when he's around or not.

To spice up the lackluster combat, developers decided to mash in a bunch of game mechanics from other games. Did you like scaling walls in Uncharted? How would you like a glitchy, clunky version of that here?? You could sneak around vents in Dues Ex Human Revolution, and that was a really good game, so using vents here would make this a good game too, right?? And remember that game with the awesome swimming level? Oh, that's right, all swimming levels are horrendous (2d platformers are the possible exception)! Why does one exist here?? Futuristic space adventure, that's an obvious place for some swimming! It's bad enough you get stuck on the environment when you're walking, but trying to navigate the invisible space cushions underwater with extremely jerky movements while your virtual breath runs out... bleh. 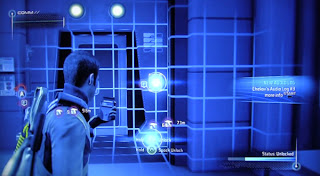 Another big part of the game is your Tricorder, which is quite overused. Not only can you use it to scan the environment for interactive objects, you'll use it for repetitious hacking minigames, for activating collectables, and for various combat and stealth power-ups. So... much... scanning...

Okay, what about good points? I like the desaturated cover art. That's something, right? And there's plenty of lens flare. Is that good or bad?

Actually, the best part of this game is the license. There's a good recreation of the Enterprise (though lacking in the interactive parts) and its crew. All of the main movie cast not only allowed their likenesses to be used on the character models, but they also voiced their roles. For a fan of the movie, that is fantastic! Although, Uhura seems to be stuck in sarcastic mode. Maybe that's just Zoe Saldana's bored voice. Everyone else seems more enthusiastic. Although it'd be nice if the character animation was on par with the voice acting. Ventriloquist dummies abound!

While the story is a pretty run-of-the-mill excuse to move from section-to-section (with far too many falling/gliding sequences), I thought the dialogue was very well written and very accurate to the characters... except maybe for Bones. He comes off as a coward... is that how he's written in the new movie? From what I recall of the original series, he was never afraid to do anything, he was just grumpy about having to do it (And with DeForest Kelley being older than the rest of the cast, he might have asked to avoid more action). 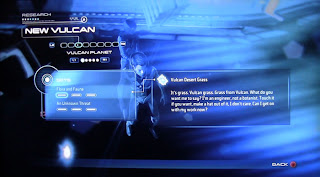 There's even written reports about the various collectables you scan with your tricorder. These are presented as logs made by Scotty, and they fit his humorous disposition, though it's too bad they didn't get Simon Pegg to voice these as audio recordings.

All in all, Star Trek is a lame, buggy game with great fan service. It could have been much better if they had they targeted this game for the home video release, allowing them to focus more on the combat. 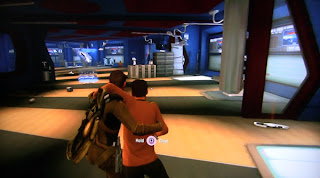 Recommended for: diehard Trekkies. Seriously, the Trek fan service is all this has got going for it. However, there's a significant amount of servicing going on. But wait for a price drop, this is not a $60 game.

Franchise fixes: Just take more time with the development next time. Perfecting one area of the game (combat) is better than trying to distract with a bunch of cruddy attempts at variety.
Posted by meager at 6:20 PM