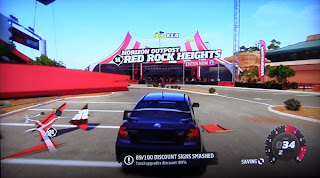 There's nothing necessarily new about the gameplay. Just drive around, pass other cars, win races. Win enough in one circuit to be awarded a Wristband that advances you to the next higher bracket of races. There' also a secondary scoring system that's very reminiscent of Project Gotham Racing's kudos system. Maintaining speed, powersliding and even smashing small objects will increase your popularity ranking, which in turn will reward you with special races that can unlock new cars. These gimmick races are fun diversions, having you face off against hot air balloons and airplanes.

I had learned from my previous Forza experience, and so I immediately stripped away most of the hand-holding driving assists. This not only gave me more money for my performance, but it also made me feel like I'm in actual control of my driving. It's such an odd thing... these assists are for players (like myself) that aren't into driving games and as such don't have many skills, and yet instead of enhancing the experience, they really hinder it for me. I even turned off the rewind feature, and only regretted not having it once: Racing for my final rival's car around the entire length of the city, I totally missed a couple turns and had to stop and circle around. A better on-screen GPS would have been helpful.

The open world style really fits this game. I hardly ever used the fast travel system for two reasons: One, most of the fast-travel locations (the exception being the festival headquarters in the center of the map) cost in-game currency which was better spent on new cars. And two, the driving was just fun. I wasn't just driving from race to race, hurrying the game along. I highly enjoyed just driving around, whether it was searching for collectables, starting impromptu races with other circuit rivals, or simply enjoying the speed. I can find fault with the map, however... on either side of the city there are dead-end sections that require a long drive in to explore. They really should have added a second road (or more) out of those areas. As they were, I avoided going there until there was a event I had to complete. 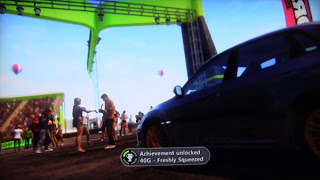 I'm hesitant to say there's a story to the game, because there isn't. You're a nobody who enters a racing tournament, determined to make it to the top. A literal nobody: Generic White Dude in a Blank T-Shirt without any dialog (that I recall). Not sure why they even bothered making a character model for him. Although you only see him a handful of times, a create-a-character option would have been nice. The only other characters in the game are the flirty Festival Coordinator, who lets you know about new events as they become available, and a new rival for each level of the Festival. These rivals have about three saying that they'll rotate through when they trash talk you at the beginning of the each race. Why the developers couldn't just come up a dozen lines for each so you could have unique oh-snap-wannabe dialog for each race. A bit lazy, I guess. But I always race to blaring music, so I paid little attention to their blather anyway.

It is a bit disappointing that the online multiplayer is totally segregated from the main campaign; you even have to rank up and earn cars separately. I'd hope you could have had friends driving around in your city with you, much like Test Drive Unlimited. But the multiplayer modes are fun, as I enjoyed the crazier ones. The king of the hill game where a dozen cars are flying through the air and sliding around a bumpy open field trying to tag the leader car = awesome mayhem.

Overall, this was a terrific arcadey racer that really found a place in my heart. What would the hardcore Forza fan think of it? Probably not as much, since it seems to violate a lot of what that series is known for. It's an odd thing: The Forza name put it on a lot more radars than a new IP would have, but it also brought with it the baggage of the series at probably turned away many of those this title is actually geared towards. 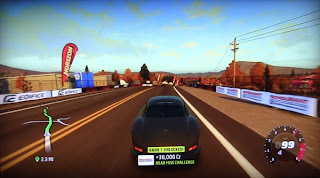 Recommended for: Fans of Project Gotham Racing who would like a great open city to explore.

Franchise Fixes: I'd like a sequel that not only eliminates dead-end sections of the map, but also opens every space. No more unsmashable fences keeping you from making your own shortcut as you're exploring. Also, integrating the multiplayer features would be great... as long as they don't become necessary to enjoy the full game.

Achievements/In-Game Rewards: It's a racing game, so you're pretty much rewarded with cars whenever you do stuff. I would have preferred a bit of dress-up for my character, but since you hardly see him it wouldn't have done much good anyway. The achievement list is pretty standard fare, awarding you points pretty steadily as you rank up and complete tasks.
Posted by meager at 3:10 PM