Oh, Squirrel Girl, you deserve so much better than this. 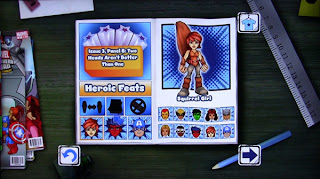 Marvel Super Hero Squad: Comic Combat is one of the few games exclusive to the infamous uDraw game tablet, the failed peripheral that nearly sunk THQ. And if all the uDraw games were this bad, its failure is a good thing.

Previous Super Hero Squad games were somewhat dull and tedious, but adding the control scheme from Hell makes you forget all about the boring monotony. Combat is equivalent to a strategy game, where you tell your troops where to go and who to fire at, then you watch them do it. The characters in this game are not well trained soldiers, and simple navigational directions get blundered as they struggle moving around obstacles or even each other. And when they get to the general area that you directed then to, they'll often immediately disperse, wandering off towards random things like a distracted toddler.

You can select a character to control individually, or the entire crew (up to three "Squaddies") at once. Using your stylus, you simply click a spot where you'd like them to go. Simple, yet trying to move then offscreen is a tedious affair.  You can touch the edge of the visible area and slowly plod them along as the screen area moves with them.

If an enemy or breakable item is on the spot where you click, they'll attack it. Ranged characters will often move away from the target, so that they're attacking at maximum distance. They don't seem to care that moving away puts them in the line of fire from something else, such as the stage where there's a GIAGANITC LASER firing down the center of the screen. Also, if the enemy they're shooting at is knocked down, they'll be out of range, so they'll just stand around like there's nothing to do. Any melee character you brought along will be on his own until you manually command his buddies to rejoin the fray. If there wasn't a way to make the A-I smart, then they should have included a general "attack" command. 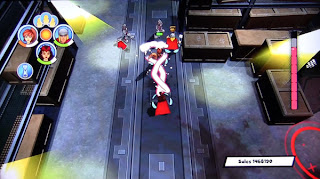 There's also no defense maneuvers at all, with the exception of certain characters special moves that can heal or briefly block damage (Generally, men's special moves attack, women heal. Not the most progressive game). At least, I assume the bubbles Invisible Woman puts around her teammates are shields. The game is also horrible at documentation.

There's no help menu, and nothing to explain what anything is, aside from generic tutorial instruction early in the game. The small game manual mentions the coins (or "issue sales") you pick up in-game unlock items like upgrades and alternate costumes. Nowhere is there anything to indicate if you have everything. Everybody has one alternate outfit, and I think my powers are all up to level 2, but there's no list to tell me if I should be expecting more or not. I don't even see any place to tell me if my powers are really level two or not, the last pop-up I noticed said "Orb Attack upgraded to level 2". I guess that's good? Who knows.

Besides moving around Squaddies, you can activate draw attacks with your stylus, by sketching a quick path from a character. They will then fire a projectile attack, or melee-only characters will perform a rushing attack. The problem is, it's only really effective if the enemies are standing still. And most projectile attacks won't go further than the first enemy. Hope nobody's standing in the way of the person you really want to hit.

You also have "Glyph Attacks" (I only know they're called this because the manual says so).  You can draw a circle to get an Orb that you can roll around to damage enemies. Drawing a triangle makes a decoy to distract enemies. And an "X" will create a bomb. Seems easy enough. Expect the game has a lot of trouble distinguishing your attempts to draw a glyph from you just clicking to move your characters. At least two-thirds of the time, my attempt to draw something is misconstrued as a movement command. 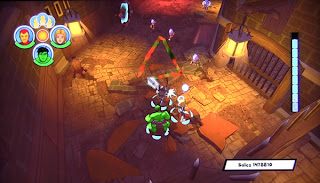 The only other abilities you have are one-time-use Earthquake and Zipper-Rift power-ups. The Earthquake is the only control I had no problem using. Simply shaking the tablet back and forth activates this powerful attack. The Zipper-Rift is the opposite story. It's activated by placing your thumb and finger on the tablet and performing an "un-pinching" motion. In theory. I only got it to work easily once. Every other time, I struggled for nearly a minute trying to get it to work. By then, most of the enemies were gone. It is an absolutely idiotic concept to make you suddenly use your fingers when playing the game. It should have been activated simply by clicking the zipper icon. Keep. It. Simple. This game has the worst controls I've ever encountered, and would have benefited greatly from just being another standard controller-based brawler.

I have to give some credit to the writer for actually making the storyline specific to the uDraw tablet. Instead of just slapping a game with hideous tablet controls, the entire storyline revolves around Dr. Doom discovering "you" helping the Super Hero Squad with your "power pen". He plans to cross into your dimension to steal the pen. It's a lot of filler, as his minions gather supplies he needs, and when he achieves his goal, it's a very brief, unfulfilling fight. There's also some inane sub-plot in the cutscenes with Dr. Doom's mom bothering hm. It has absolutely no bearing on the story whatsoever. You never fight her. She's just there to annoy her son. That's the entire game: brief, annoying, and unfulfilling. The entire game, including achievement hunting, is completed under five hours.

Graphically, it's blasé. Same Super Hero Squad graphics (which were never impressive) in much smaller play areas. There's some amusing voice acting, I assume it's the same actors from the cartoon. A lot of repetition in the dialog, of course, but I'm amused by Squirrel Girl walking around saying, "Have nuts, will travel!" And I did laugh at dimwit Hulk's answer to a certain riddle.

There's other poor programming oversights: Being disconnected from Xbox Live while playing resulted in being immediately kicked back to the main menu; There's no sound during the credits, no music or anything; And there's no explanation to the Heroic Feats. I figured out the icons for finding the comic stash, and not dying during a panel. But what's that third icon mean? And does accomplishing these feats reward you with anything at all?

All in all, this poorly programmed mess is a total kick-in-the-groin to those of us who love Marvel Comics characters. 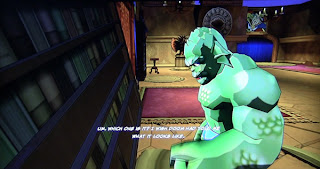 Recommended for: fans of Squirrel Girl. This is her first video game appearance. I wouldn't recommend actually playing it, but having it there in your SG shrine would be its best use.

Franchise fixes: since the uDraw tablet has been discontinued, the SHS games should go back to the old formula, just focus on making them more fun to play.

Achievement/In-Game Rewards - As I mentioned, this is a quick 1000 achievement points for whoever wants to put up with the shoddy control scheme. Aside from a single alternate costume for each character, the game lacks much reward for its players.
Posted by meager at 7:04 PM