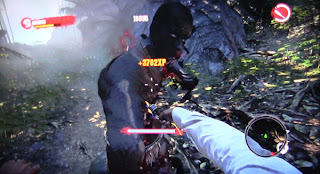 It's not a well-written masterpiece, by any means. The cut-scenes range from "What is going on?? Who is that guy??" to a head-slapping "WTF?!? Did I miss a plot point somewhere??" The main characters are flat and have no emotional arcs or any real involvement in the storyline. They're just there to kill things and be bossed around by everyone they meet.

But the combat is visceral and exciting. Once you get the basics of combat down and find yourself a hearty weapon, the thrill of killing hordes of zombies is undeniable. A well-timed expertly aimed swing of a sharp blade can decapitate a zombie instantly. A savage swing of a blunt instrument can reduce an enemy's bowling arm to a floppy, useless appendage. And as your character is upgraded, you can unlock a head stomp that will kill any knocked-down foe, even "special" zombies.

Add in modified weaponry with fire and electrical upgrades, and cruise around with a full four-player team? You're in for a night of a fun, unstoppable zombie smackdown rampage.

And it looks great! There's an impressive number of character models. That's not to say you won't occasionally see two identical brain-biters charging at you, but there is a very nice variety of zombies and survivors. And thanks to the first-person perspective, the models are huge and all the bloody details look fantastic in high definition! And while the main characters have personalities composed of tired clichés, their visual design is top-notch, each looking distinct and unique to the game. Too bad they don't offer some different outfits; zombie killing is always more exciting with a little dress-up. 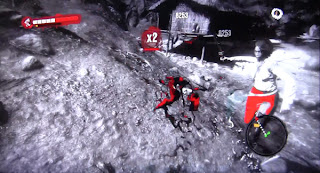 The game can easily be compared to Left 4 Dead or Dead Rising, but it distinguishes itself as more of a gritty brawler, and somewhat casual open-world action game that just happens to have many, many zombies. I call it a brawler, because 98% of the combat will be close-quarters. There are guns, which only become available later in the game, but they're not nearly as effective against the undead. The limited amount of ammo you can carry makes firearms only reasonable choice against human opponents who are shooting back. Yes, it wouldn't be a zombie game without human bad guys spoiling the "let's stick together" atmosphere.

I wish there were some more hand-to-hand fighting techniques, though it would sacrifice some of the realism if you were busting out wrestling moves on zombies ala Dead Rising. One character, Sam, has a Charge move, which essentially knocks over anybody he runs into. But otherwise, if you're without a weapon you can punch zombies with your bare fists or you can kick them for minor damage. Kicking can knockdown most enemies, and they'll take more damage while on the ground (more importantly, they can't fight back until they return to their feet). One thing you have to be extremely aware of: your stamina. If you played the game upon release, kicking took no stamina, so you always had that as a last resort when you tire yourself from swinging your giant axe around. But the developers have since patched the game making kicks use stamina, like everything else. 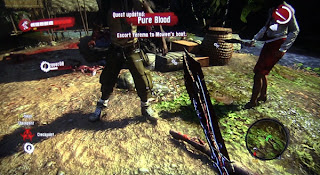 The game is filled with very interesting choices made by the developers. Most of the time I'm totally unsure if they were conscious decisions, or if they were merely oversights, or perhaps they just ran out of time/budget. For instance, there are almost no ambush moments. In a game like this you expect certain dark corners to be hiding a zombie ready to lurch at you as the game intentionally directs you into its path. Or as you go into a building to retrieve a quest item, common gaming knowledge tells me to expect bad guys to show up behind me to try and stop me. Maybe a big betrayal will occur when I take this item back to the quest giver and I'll have to fight him for it. But these things don't really happen. It's bizarre, and initially it seems disappointing. But then again, it seems to fuel the uniqueness of the game. It's trying to be less of a "game" and add more realism to the desperate struggle for survival rather than adding a lot of convenient gameplay clichés. Even the couple "boss battles" are hardly such... they absorb extra damage, but really not all that much.

And I'm not sure I've played a game with less penalty for dying. You do lose some of your money... five or ten percent, maybe? But you'll regain that after looting a few corpses. And you'll usually start within about 30 feet of where you died (Unless you're wandering... I've noticed that if I've veered away from the course of an active quest, my respawn will be a lot closer to the quest objective than I was). You won't loses your inventory, and slain enemies are still dead. It's quite generous and helps keep the fun going. No rage-quitting here.

The game is absolutely meant to be played co-op. It's much more fun and exciting to have help around, and even some impromptu zombie-killing competitions. And since the cutscenes all involve the entire group, it makes more sense if you're actually playing with a full crew (NPCs also refer to you in the plural sense). What's impressive is that you're given free reign around the very large maps. You're limited to being in the same area map (such as Act 1's resort area, or Act 3's jungle setting) as the host, but these things are huge! Everyone can be off completing separate quests, or teaming up to power through them one-at-a-time. The only time you need to all be together is to fast travel to other locations, to enter buildings/sewers that have their own play area, and at certain points in main storyline quests. But don't believe the original packaging... this game is online (or system link) co-op only. No local co-op options, which is really disappointing. This game is best shared with a buddy. 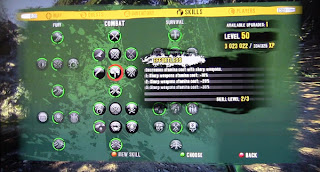 Leveling up gives you access to a wealth of character-specific upgrades. These allow you to do more damage with specific weapon types; use less stamina; gain more XP, and so on. Each character also has a Rage ability. When activated, your vision goes stylistically black & white, with enemies glowing red. You have unlimited attacking ability while Rage is active, using your character's weapon specialty to deadly effect.

The missions are limited in scope, almost all are fetch quests, with a few escort or clear-the-area missions thrown in for good measure. But the size of the five maps gives you a good variety to travel around, even if you are doing essentially the same things over and over.

There is a strange decision to make the "storage locker" be a character that's heavily involved in the storyline. At times, she's off being part of a mission, meaning you have no access to your storage! You won't even meet up with her until the end of Act 1, which is several hours into the game. So, if you're on a second playthrough, you can't access your saved loot until you reach that point of the game. Bizarre choice. 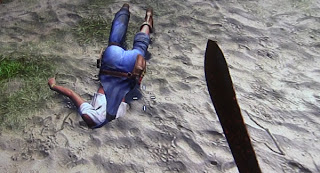 There are some bugs with the game. Aside from the occasional lag you might experience online, there's not too much that's incredibly bothersome. However, there is one mission where you have to escort "Jin" to a bunker. I played the mission on three separate playthoughs, and every single time, she glitched out. Twice, she got knocked down and ended up with her head in the sand like an ostrich. The other time, she just stopped walking for no reason. I had to reload a checkpoint and it proceeded without hitch from there.

Overall, I had an incredibly fun time with this game, so it deserves my highest recommendation. I played so much of it when it came out, I had to stop myself to give other games a chance. And when I recently got into it again, to join a friend on his playthough, it quickly became an obsession again. I can't wait until they make the sequel!

Recommended for: everyone not put off by graphic head-splitting zombie violence.

Franchise fixes: Couch co-op would be nice. Customizable characters would be a huge bonus. More weapon mods, with power ratings listed on the description. Just more of everything would make it a bigger and better game. And I'd like to see a scenery change so this island doesn't just get rehashed.

Achievements/In-Game Rewards - I got the full 1000 core achievement points for this game, thanks to a fun list. A bit of grinding is offset by a variety of specific tasks, such as setting 10 zombies on fire at once, or getting 10 headshots in a row. Apart from the regular RPG-type upgrades, there's not much else as far as in-game rewards.
Posted by meager at 3:26 PM